We Are NOT From France??? 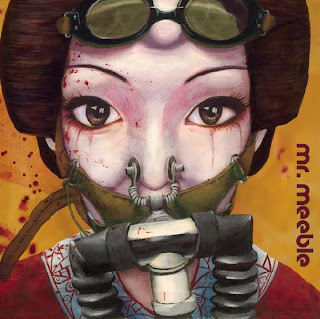 I suppose this is one of those instances where just a bit more research would have done me a world of good.  Let me explain... you see, I only looked to Mr. Meeble’s MySpace profile when I wrote my original entry on the band.  On that page the band claims to be from France.  But, upon scratching the surface just a bit more - visiting other of the band’s sites, etc. - I discovered that they are truly from Arizona.  I feel a bit dopey for not knowing this before writing about them.  I feel even dopier for having to now retract my retraction about not caring for unsigned, contemporary French bands.  As it turns out, France is once again safe to trash - at least in terms of their music.
I can’t help but wonder, though, had I realized Mr. Meeble was an American-born concoction, would I have been as impressed with their output.  I mean, when you have very low expectations, anything even half-way decent sounds great.  I’ll have to ponder this a bit more.  Which will require more caffeine.  So I’ll ponder it later and probably write a bit more at that point, as well.
What I will say for now is that Mr. Meeble (AKA Devin, Michael and Blain - if, indeed these are their real names and the photos [and one drawing] of them at MySpace actually represent real people) is/are intriguing me more and more with their slippery slight of hand.  Works pretty effectively for College and/or Indie band cred... time will tell if this turns out to be an effective tool for connecting with those outside this rather selective group of Ironophiles.
S.
Posted by SP Smyth at 7:28 PM No comments: 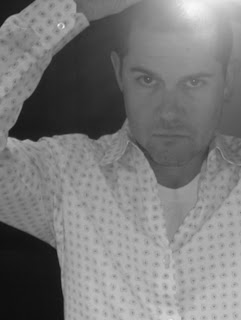 Apparently my recuperating puppy is feeling himself again.  Despite having his belly laden with a series of bright purple stitches, he still managed to jump over the 3.5’ fence surrounding his sleeping pen during the night and escape into my partner’s office.  Not bad for a sickly little ankle-biter.
Today is one of those days when I find myself lacking the will to sit down at my computer and spend an hour or two composing some wonderfully insightful, well-crafted mini-essay about some random band or musician or other.  I just don’t have the drive... at all.
I’d much rather open up my music or film editing software and immerse myself in one of several projects I’m working on at the moment.  So, instead of writing something in support of some other person or group of persons I’ve never met, never plan to meet and in whose career(s) I have no vested interest, I will instead regale you with tidbits of what I’m currently up to.
That’s about it for now... Back in a day or so, once my critical muse returns from her/his (hopefully) brief hiatus...
S.
Posted by SP Smyth at 9:26 AM No comments:

The Perils of Pip 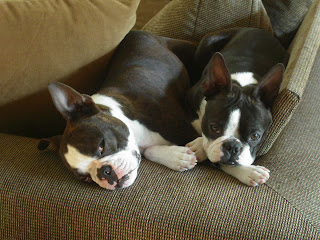 Puck (L)  and  Pip (R)
As I began working on my blog this morning I was distracted by a cry of alarm from across the house.  One of my Boston Terriers, Pip, had been developing an infection on his stomach where he’d had an operation a few months back.  We began giving him antibiotics and warm compresses yesterday after taking him to the vet, but when he woke up this morning the infection had begun to abscess.  It looked really bad, probably worse than it actually was, but the site of it caused my partner a great deal of distress, hence the alarming cry from the dogs’ sleeping area.
I gave up my attempt at writing - just as well as I was really not very focused at the time - and we took Pip back to the vet.  Long story short, we were given a choice of returning home with him and taking a wait and see approach (waiting and seeing for what, I’m still not sure - I don’t think it could have gotten much worse without being life-threatening and I had no idea how to make it better) or to have him go under the knife to fix the problem.  We chose the latter.  So now Pip is at the vet, awaiting surgery, and I am home, biting my fingernails.
Pip has been a bit sickly since the day we first met him.  He was carsick the whole trip home from the breeders.  He developed a hiatal hernia a few weeks afterward, which mandated emergency surgery and several weeks of recovery.  Since then he’s developed a series of infections along the area where the surgeon stitched him up.  Despite all this, he is one of the most delightful, playful, loving animals I have ever had the pleasure of knowing.  His brother, Puck, isn’t half bad, either.  I feel very lucky to have them in my life.
I realize this entry has nothing whatsoever to do with the subject matter of this blog, but I wanted to get a blog entry out today and I’m too worried about Pip to write anything else worth reading.  I suppose I could write a song about the situatioin - I tend to do that whenever things are stressful in my life, hence all the ditties about fights, breakups, nervous breakdowns and midlife crises.  Yes, I do, in fact, perceive the world as my own private catharsis machine and anybody lucky enough to read my blog or listen to my music as my personal confessor.
Not to worry, though, I haven’t forgotten about the Scottish bands I promised to write about this week.  As soon as Pip’s home and safe I’ll pick up where I left off.
Peace,
S.
Posted by SP Smyth at 9:24 AM No comments: