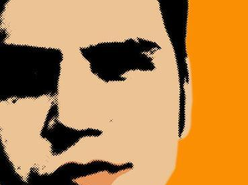 I’ve decided to put my expose on Palm Springs bands on hold for the time being in order to focus on a musician from New York recording and performing under the moniker of Pazz Kluger.  Pazz was the first person to leave a comment on my Reverb Nation fan site last week, so I thought I owed him the courtesy of listening to his music and commenting back.  I was truly impressed with what I heard and let him know so.

Subsequently, we sent messages back and forth for several days and then finally did a phone interview this past weekend.  This was my first such musician interview since starting my blog last Fall, so I’m pretty much learning how to do this as I do it.  Yes, that was meant as an up-front disclaimer.
During our hour +/- conversation we spoke of a shared passion for early ‘80s proto-goth and post-punk music from bands like Joy Division, Bauhaus, The Cure, etc.  I found it fascinating that somebody much younger than I would be drawn to such music.  (For the record, I was a teenager in 1979 when Joy Division and the Cure released their debut albums and Bauhaus put out their first single - all on vinyl).  I was impressed with Pazz’s knowledge of this era and his aptitude for capturing its essence within his own oeuvre.  He spoke at length of his respect for former Joy Division frontman Ian Curtis and his willingness to “lay it all on the line” and “expose his soul” for his art and audience.  Pazz said he seeks to emulate this approach within his own work, which he characterized as driven primarily by the experience of loss.
In addition to the aforementioned, Pazz cited bands such as TSOL, The Smiths, Nick Cave, Camera Obscura, The Specials and even Johnny Cash as influences.  Although he never indicated to me that he drew inspiration from The Psychedelic Furs, when I compared his voice to that of Richard Butler’s he took it as a compliment and seemed genuinely flattered.
Pazz was trained as a graphic designer and I find a pop-art, even painterly quality to his work - a clarity of purpose that is repeatedly thwarted through layers of disjunction and ambiguity.  He describes his process as organic and even DIY.  As I listen to his songs I find myself hearing the ghostly voice of Andy Warhol, when asked why his Campbell’s Soup Can paintings featured flaws and running paint, replying “...well, an artist must drip.”  I believe this is the key to understanding what Pazz means by DIY - that one must allow songs to be what they are as they grow and mature, leaving all the inherent rough edges, stops & starts and even flaws intact, rather than polished over and prettied up.
Pazz told me that he worked on his current eponymous release for about a year and a half, recording in his basement after work and off hours from family duties.  He self-produced the entire project, writing all songs as well as performing all instruments and vocals.  He is rehearsing with his new band at the moment and will begin touring about the New York/New Jersey area in the coming months.  He has also begun work on a new album which will feature his current lineup.
You can find Pazz at MySpace, Facebook and Jango among several other locales, although I suggest you visit his Reverb Nation page first, as he has links to his other sites posted there.  I further urge you to check out his music.  Of his songs, my particular favorites are Forfeit of Life (which puts me in mind of late ‘80s Love and Rockets), Karma Stay Away, Sins, and Locked.  Although I’ve got to admit I like them all and have found they only get better with repeated listenings.

Pazz Kluger is also available for download from Amazon.com.
S.
Posted by SP Smyth at 1:56 PM