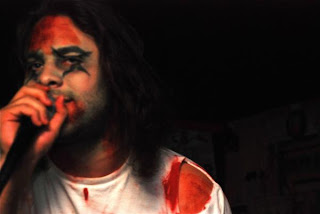 I mentioned in my last blog that I’d be focusing on musicians from the Palm Springs area for the next few entries.  To that end, I sent out a brief inquiry yesterday to several local bands asking for any info they might want me to share.  The first person I heard back from was  Sean Brown (aka Sa!nt).  So he’s won the coveted honor of being my featured artist today.
The first thing I have to say about Sean is that he’s got an amazing voice.  Although I have a pet peeve regarding YouTube videos that feature musicians playing guitar and singing from their bedrooms, I have to say that in Sean’s case the video he’s posted to his Reverb Nation and MySpace sites actually highlights what a truly powerful and versatile singer he is.  I wish I could sound that good without all my studio effects - hell, I wish I sounded that good with them!
As for his studio material, I’m very excited about what I’m hearing in terms of composition and production.  But most importantly, his songs are the sort that keep me wanting to hear more.  I highly recommend giving him a listen and judging for yourself.
If you’re in the Palm Springs area and would like to see Sean live, he’ll be performing at Shenanigans this Friday night with his band Drop The World.  I’m still waiting to hear back from Sean re: showtime.  I’ll post that as soon as I know.
I’ll be writing more on Sean in the next week or two.  We have a tentative interview scheduled and I’ll have more detailed info afterwards.  In the meantime, check out his sites, watch his videos and listen to his music.
S.
Posted by SP Smyth at 10:17 AM