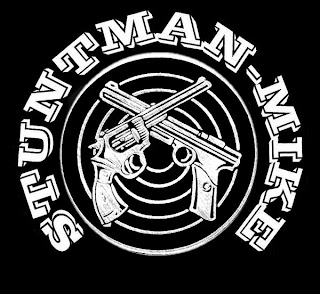 I began writing this entry on Stuntman Mike last week, but then developed an inner ear infection, which left me hearing everything as though it were filtered through wads of cotton.  I didn’t think it wise to attempt listening to and reviewing music in this condition, so I set the project aside until this morning, when my hearing miraculously returned.
I want to begin here by expressing how amazed I’ve been the past couple of weeks by the number of really outstanding unsigned bands DJ Bluetone has been giving voice to through his webcasts.  I am in his debt for opening my eyes and ears to them.  Prominent among these has been Stuntman Mike, a band that, as with many other acts Bluetone’s been spinning, hails from Scotland.
Stuntman Mike, like Kill The Drama, has such a tight, commercially viable sound that any attempt to comprehend why they are not major label material simply boggles the mind.  I like to think this is because the corporate music industry is going down the same route print media has the past few years - losing ground to independent voices on the internet, responding by playing it safe and only investing in the most banal, polished and packaged “sure bets” while leaving the really interesting innovators to build their own independent careers.  After suffering through the first hour of last night’s Grammy Awards show (or as I like to call it, the ‘if we create a spectacle loud and extravagant enough we’ll be able to distract our audience from realizing how really, really bad our music is’ show), I’m hopeful that the recording industry demigods are experiencing the twilight of their reign.  Which would be wonderful as, in my less than humble opinion, the entrenched music interests pretty much ruin everything they lay their greedy, unimaginative hands upon.
OK, off my soap box and back to the matter at hand.  I can’t gush enough about Stuntman Mike.  To again compare them to Kill the Drama, they are one of those bands that manage to make pop music which stings a bit - with catchy, memorable hooks that, while easily digestible, go down more like really strong, black espresso than the way-too-sugary soft drinks we’re typically served.  Each song takes off from the first note and races ahead, pulling one along by the viscera.  They’re loud and driving, with lots of pounding drums, thumping bass notes and searing vocals.  And for a quartet their sound is surprisingly rich and full, their recordings incredibly well-produced and their live performances faithful to their studio work.
The band cites influences ranging from Muse and The Police to Metalica, Foo Fighters and even Elvis (although whether Costello or Presley, I can only surmise).  I would add U2 to that esteemed list, especially as regards Billy Mulholland’s deft use of guitar delay effects that echo (pardon the pun) the best of The Edge’s early work.
In addition to their MySpace site, you can find Stuntman Mike’s music and videos on Youtube and at their own JustinTV Channel.  They’ll be playing live at the Vale in Glasgow on Saturday, February 13 (which, if anybody is interested, also happens to be my birthday), broadcasting live on DJ Bluetone’s channel (and possibly their own channel as well - I’ll try and clarify that ASAP).  They also plan to release their first single, “10,000 Lives,” March 1st, which will be available on iTunes.
Finally, I can pretty much guarantee you will hear them today on DJ Bluetone’s webcast from 1-4pm US Pacific time, 4-7pm Eastern.
S.
Posted by SP Smyth at 7:08 AM