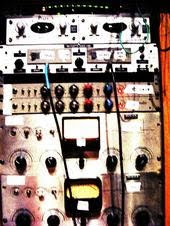 This is my first entry of the New Year... I guess I must have overslept or something and missed the first four days.  Actually, I’ve been working on my own music this past week, a task I’ve neglected lately in favor of promoting my older material and writing about great unsigned acts, such as my favorite of the day, Beatnik Jr.

Beatnik Jr. is an enigmatic band from LA with that rare ability to experiment without being so dissonant as to appeal to only a small sliver of listeners.  As one of five finalists for the 2009 Hard Rock Ambassadors of Rock Battle of the Bands, Beatnik Jr. proved it possible to appeal to a popular audience while simultaneously maintaining a high degree of originality.

Their genre is a bit difficult to pin down.  According to the band’s own press releases “Fans have referred to Beatnik Jr.'s music as sounding similar to Radiohead, The Faint, The Postal Service, Queens of the Stone Age, Foo Fighters, and even The Beatles.”  I would also add The Flaming Lips and at times Death Cab For Cutie to that list - the latter particularly in regards to lead singer John Maro’s vocal style.

Still, I lament the need to compare one band to another, especially in this case.  I think it suffices to say that Beatnik Jr. manages to genre blend, to beg and borrow and to innovate all at the same time.  Their songs are full of sonic surprises set to uptempo pop-beats and melodies, resulting in a sound that is both fresh and familiar.  Their recordings are tight, well-produced and endlessly listenable.

For more on Beatnik Jr. you can read Liberty London Girl’s blog and visit the band’s MySpace page.  They also have five tracks available to download from iTunes.

And since you’ll already be checking these guys out at MySpace, you might as well stop by My MySpace page to see and hear what I’ve been doing lately as well : ) [That’s meant to be a sheepish grin, BTW]