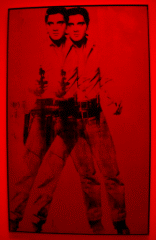 Very pleased this morning to return to France and eat my words regarding my previous comments about no good unsigned French musicians.  Case in point, Double Elvis, a band from Bretagne that blends a melange of Techno-Industrial, Post-New Wave, Darkwave and retro ‘80s Pop with message songs that, with the exception of “Virginia Tech,” make their point without being too pedantic or heavy-handed.

I am reminded of New Order, The Cure, Camouflage and even late ‘80s Xymox, as well as some early Shoe-Gaze bands like Kitchens of Distinction and the Chameleons.  At the same time they are fresh and original, with a rich, lush sound and an assertive vocal style that is at times reminiscent of Billy Corgan, at others of David Bowie and, in more subtle moments, of Chris Martin of Coldplay.

Their songs are sung in English, which I suppose makes them more accessible.  I can’t deny that the acts I find most appealing from the French-speaking world are those who do sing in English.  Personal prejudice?  This actually confuses me because I love the French language.  But for some reason I find French rock vocals detached and disinterested much of the time.  Too much ennui and nuance, perhaps?  Not like those raucous Germans!

Standout songs include “Sea of Ashes,” “The Art of War” and “Perdido Street” - a rich, dreamy ballad that is my absolute favorite.  As I alluded to above, the song “Virginia Tech” bugs me a bit.  It’s one of those songs in the tradition of Paul Hardcastle’s “Nineteen” in which news soundbites become the lyrical, narrative content of the song.  I don’t like “Nineteen” at all, so I guess this is just my personal bugaboo.  I hate being assailed with news reports in musical arrangements - I just think it’s a too easy and overstated way to make one’s point.  But enough about that, there is plenty more to this band that I find truly interesting and compelling.  I wish them gobs of success and hope I can find some downloads soon...