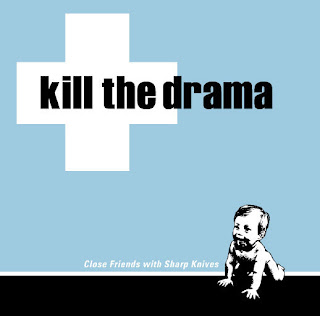 I’ve only been thinking and writing about the world of unsigned musicians for a very short while, so that probably explains my continued mystification with what sort of acts do and don’t attract record label attention.  Case in point, Kill the Drama, a self-described alternative-progressive rock band from Pittsburg, PA. with a significant following whose sound treads paradoxically between emotional rawness and flawless polish.

According to different sources, Kill the Drama first took the Pittsburg stage somewhere between 2005 and 2006, quickly gaining local acclaim and amassing a sizable fan base.  They released their first CD, Close Friends with Sharp Knives in 2007, re-releasing it to electronic venues such as iTunes in 2009, where it enjoys a solid 5-star listener rating.

They are a bit more pop-driven than I typically prefer, but you’d think this would be a desired selling point.  Their songs are memorable and catchy, neither overly simple nor needlessly complex.  Their videos are professionally produced, their studio recordings rich and full of depth and texture.  Of the songs I’ve listened to, “Sunshine” is by far my favorite.  It appears to be their most popular song, as well, garnering in excess of one million plays on their MySpace site.

Bryan Laskey, the band’s vocalist, delivers his pathos-driven lyrics with a force and passion reminiscent of Muse’s Matthew Bellamy.  Guitars are rough and distorted, drums are full of symbol crashes, and bass riffs harken to early pioneers of progressive rock such as Yes’ Chris Squire and Geddy Lee of Rush.  I’ve also read comparisons between the band’s sound and that of groups like Smashing Pumpkins and Placebo.  According to the band’s Wikipedia page, Ben “Skinny” Solnik, their original bassist left in 2008 and was replaced by Marios “Mars” Papachristou.  The band subsequently announced last month that they had replaced “Mars” with a new bassist, Chris "Oz" Olzewski (makes me wonder if repeatedly hiring bassists with nicknames might not be such a good idea).

My biggest regret over writing about bands like Kill the Drama is that I don’t have more readers and thus the power to affect any change to their current unsigned status.  Although I’m sure they’ll do just fine on their own.