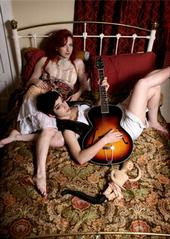 No, it hasn’t escaped my notice that for the past few weeks I have almost categorically ignored female musical acts in my blogs.  I did devote one post to Simone White and I briefly mentioned Jen Gloekner (at the very end of my narcissistic love fest “All About My Self”), which is doubly ironic, as both performers actually have recording contracts.  So today I shall endeavor to rectify, in at least some small way, my past transgression of only writing about unsigned men.

I found Vermillion Lies among Amanda Palmer’s MySpace friends.  Which is precisely the sort of company you’d expect them to keep.  As with Palmer’s other band, The Dresden Dolls, Vermillion Lies is a modern cabaret duo - although in this case the band consists of two sisters (Zoë and Kim Boekbinder).  And unlike the Dolls, they are a bit more folk than punk.

According to their bio they have performed in venues “From Caesar's Palace in Las Vegas, Nevada to Moscow, Russia and Braga, Portugal.”  They describe their songs as “ranging from lyrical folk ballads to raucous circus marches.”  Their performances, both in their studio recordings and live acts, are full of vigor and whimsy.  They routinely employ antique instruments and typically non-musical devices (a barbecue grill for percussion, for example) in their songs.

I can’t say they are my favorite act of this sort.  I still prefer the Dresden Dolls hands down, but they are definitely worth paying attention to.  BTW, each sister recently embarked on respective solo projects.  I’ve included links below to each of their sites.