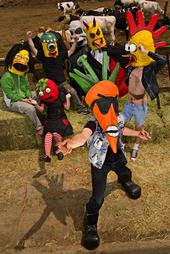 OK, now time for The Radioactive Chicken Heads, a band I think is just plain awful... and I don’t believe they’d disagree, as awful appears to be what they’re striving for.  Equal parts Dead Kennedys/Stooges wannabes, Gong-Show rejects and Banana Splits [or possibly HR Puff-n-Stuff?) cartoon character puppet-things (if you’re too young to remember any of these cultural references... I envy you).

You’ll find a short clip of their appearance in a talent contest from the Tyra Banks show posted to the band’s MySpace page.  They lost the competition... by a significant margin.  I dare you to convince me they intended otherwise.  They are so bad, it has to be on purpose.

I’m still trying to figure out just exactly what they’re trying to do here.  I mean, I understand the whole costume gimmick.  And they aren’t all that bad musically (if not tediously derivative).  But I believe they’re whole act is tied to a premise that if you create a ghastly enough spectacle, fans will buy your silly merchandise - which is also available at their site.

The only reason I’ve even chosen to write about these guys (and one gal, I believe - she’s the one with the tomato for a head) was because I was shamefully drawn to their sensational nome du plume.  It’s too bad there isn’t anything remotely interesting once you get past the name.